﻿﻿﻿﻿﻿﻿Participants in the 2012 Conference and Public Consultations affirmed the need to establish the Forum and prepared an outcome document that identified the objectives of the forum, nature and mechanisms, organizational structure for its management, sources of funding and arrangements for the convening of the first annual Arab IGF in 2012.

Based on this outcome document, the Executive Bureau of ATICM expressed its support for the establishment of Arab IGF, in its 31st session (Beirut, 2 Feb 2012), and called upon all Arab institutions to participate in the Forum's Multi-stakeholder Advisory Group and annual meetings, in its 32nd session (Wahran, 5 June 2012).  In addition, ESCWA adopted in its 2012 ministerial session the Resolution 306 (XXVII) on the "Development of the Arab IGF process and sustaining efforts in the Arabic domain names field," which supports continuing the efforts on the Arab IGF process and the partnership with LAS.

Established to be in line with the mandate of the global IGF, the Arab IGF brings together all stakeholders, Governments, private sector, civil society, technical practitioners, academic community and regional organizations, to engage in an open dialogue on Internet governance issues that could contribute to having more understanding of these issues in the Arab region and support the transformation of these issues into opportunities for development.  The first phase of the Arab IGF, from 2012 to 2015, was in conjunction with the timeframe of the implementation of the 2010 Regional Roadmap that started with the five-year period 2010-2015, to be extended in line with the achieved results and follow-up.

The Arab IGF also aims to address a number of key issues related to Internet governance in the Arab region, including access, privacy and security, and openness. Similar to the global IGF, the Arab IGF brings together all stakeholders in the field of Internet policies, including Governments, the private sector, civil society, technical practitioners, the academic community and regional organizations. The Arab IGF offers a platform for these actors to engage in an open dialogue on international and regional Internet-related public policy issues and has the objectives depicted in the box below.

ESCWA and LAS serve as umbrella organizations for the Arab IGF process. The National Telecommunication Regulatory Authority (NTRA) of Egypt acts as its secretariat. 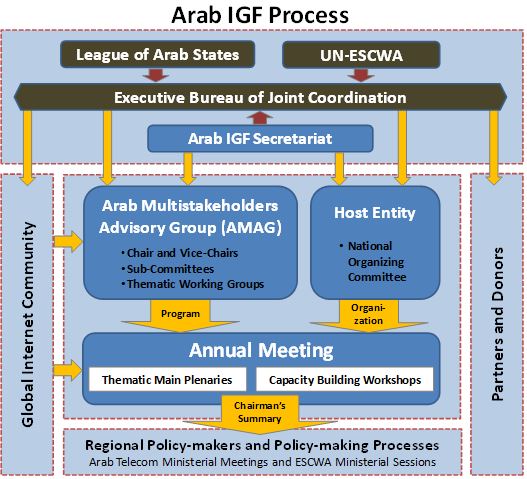 An Executive Bureau for Joint Coordination (EBJC), formed in 2013 as a decision-making body with ESCWA and LAS as leading agencies and the secretariat as a member.  The EBJC takes the major decisions related to the overall path of the Arab IGF process, including identifying the roles of partners, forming the Forum's Multi-stakeholder Advisory Group, and selecting the host entity for the annual meetings. The EBJC coordinates between the main partners and promotes a wide participation of stakeholders in the Internet governance process, with a view to ensuring the sustainability and success of the Arab IGF efforts.

The Arab Multi-stakeholder Advisory Group (AMAG) comprises representatives of all stakeholders in the Arab region and identifies the main themes to be addressed at the annual Forum, in addition to other tasks. The AMAG was first established in 2012 with 30 experts, then it was renewed in 2013 for another term, and it was restructured in 2014 to include 34 experts.  The AMAG was re-assembled in April 2015 to include 26 experts from all stakeholders in the Arab region, and the applications for its membership was kept open to encourage government representatives to be more involved in the development of the Arab IGF process.

The Arab IGF addresses key issues related to Internet governance in the Arab region, including:
1.  Access: Internet infrastructure and critical resources.
2.  Policies: International and national Internet policies.
3.  Security and privacy: Towards a reliable and secure infrastructure.
4.  Openness: Rights and responsibilities.
5.  Internet and young people: A culture of participation and development opportunities.

These issues get reviewed on a continuous basis, and are adapted upon consultations with AMAG and the Arab IGF Community in the region based on developments.

Since its inception in 2012, the Arab IGF process has held four (4) annual meetings:

Preparations for these annual meetings included the convening of AMAG and Open Consultations meetings, as well as coordination meetings.  The AMAG and Open Consultations meetings mainly seek to identify the overriding theme of the annual event, the focus areas and the event's agenda.  The coordination meetings address various activities and tasks, including, among others, the identification of the host entity in accordance with the related terms of reference, or an adaptation to it, together with the logistical and organizational preparations to events.

The main sources of funding to annual events are from the Hosts of annual meetings and their national partners.  In addition, the contributions and support of the activities of the Arab IGF first phase 2012-2015 were from the main partners and sponsors of the Forum, including, among others:

Promotion of the Arabic Domain Names System: An ESCWA Project