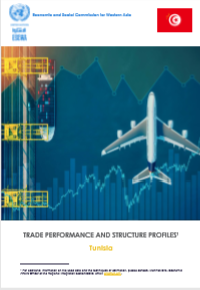 ﻿This profile takes stock of the trade performance and structure of Tunisia since 1995. In addition to aggregate trends in trade and foreign direct investment, a wide range of trade indicators are calculated specially for this profile using highly detailed product level data, making it a novel set of trade indicators for Tunisia and the Arab region. The analysis reveal that Tunisia’s performance in merchandise and services trade and attracting foreign direct investment in the past two decades have been mixed. In all three domains, the impact of the global financial crisis of 2008 is marked, with a surge in trade and investment, which proved to be unsustainable, in the run up to the crisis and weak performance in the aftermath.  Traditional destinations for Tunisia’s exports have mainly been EU countries but PAFTA countries have also been rather important destinations, much more so than their share in world trade suggests. Turkey, EU and NAFTA countries hold relatively prospects for Tunisian exports, which are more and more concentrating on few products, albeit increasingly sophisticated.