A People in Danger: Effects on Health of the 2014 Israeli Offensive on the Gaza Strip 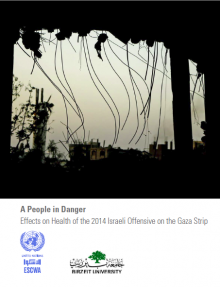 The Gaza Strip has been subject to a near-total blockade by Israel since 2007 and to repeated military assaults, the most intense of which took place in 2006, 2008, 2012 and 2014. The more than two-thirds of the population born since the 1993 Oslo Accords and have thus known little else but the hardship and fear caused by the blockade and offensives.

This study aims primarily to describe the effects of the 2014 offensive, bearing in mind the conditions created by the blockade and previous offensives, on the health and well-being of adults (18+ years of age) living in Gaza. The Palestinian Central Bureau of Statistics (PCBS) conducted the study, with technical assistance from the Economic and Social Commission for Western Asia (ESCWA) and the Institute of Community and Public Health (ICPH), analyzing data from the living conditions report survey carried out in the Gaza Strip and West Bank between March and May 2015.