UN projects a moderate growth recovery for Western Asia in 2020 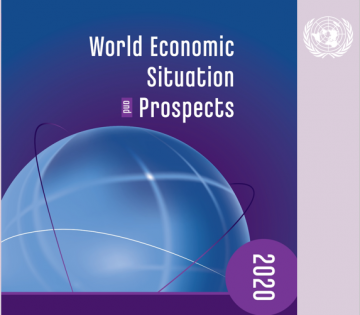 Beirut, Lebanon
The region’s outlook continues to be clouded by modest oil prices and geopolitical risks

Beirut, 16 January –Western Asia is projected to see a moderate growth recovery in 2020, as the region’s outlook remains subject to high downside risks, according to the United Nations World Economic Situation and Prospects (WESP) 2020, which was launched today.

The Report states that the global economy suffered its lowest growth in a decade, slipping to 2.3 per cent in 2019, as economic activity was impacted by prolonged trade disputes. The world, however, could see a slight uptick in growth in 2020 if risks are kept at bay.

While global growth of 2.5 per cent in 2020 is possible, the Report cautions that a flareup of trade tensions, financial turmoil, or an escalation of geopolitical tensions could derail a recovery. In a downside scenario, global growth would slow to just 1.8 per cent this year. A prolonged weakness in global economic activity may cause significant setbacks for sustainable development, including the goals to eradicate poverty and create decent jobs for all. At the same time, pervasive inequalities and the deepening climate crisis are fueling growing discontent in many parts of the world.

UN Secretary-General António Guterres warned that “These risks could inflict severe and long-lasting damage on development prospects. They also threaten to encourage a further rise in inward-looking policies, at a point when global cooperation is paramount.”

Growth prospects in Western Asia
In 2019, Western Asia experienced a sharp decline in growth, owing to both sluggish domestic demand and weakening external demand. Average GDP growth is estimated to have dropped to 1.0 per cent from 2.1 per cent in 2018. The slump in the real estate sector dampened both consumption and investment through negative wealth effects.

For the member countries of the Cooperation Council for the Arab States of the Gulf (GCC), the contribution of the energy sector to GDP growth is estimated to have been negligible. While oil prices have fallen from their latest peak in October 2018, the level of crude oil production has barely changed since that time due to OPEC-led supply ceiling coordination. Non-energy exports have also faced weakening demand from Europe, South Asia and East Asia.

The near-term economic prospects are clouded by modest oil prices, the slump in the real estate sector and geopolitical risks. Average GDP growth is forecast at 2.4 per cent in 2020 and 2.9 per cent in 2021. While weak external demand will continue to weigh on the region, recovering credit growth, a stabilization of the real estate sector, and ongoing economic reform are expected to support domestic demand growth.

Jordan and Lebanon have been facing tighter fiscal and balance-of-payments constraints. For Jordan, resilient economic growth is projected as the country has managed to sustain domestic demand growth by increasing exports and foreign capital inflows. By contrast, real GDP in Lebanon is estimated to have contracted in 2019, due to a tightening of balance-of-payments constraints as foreign capital inflows continued to dwindle. The economic prospects for Lebanon are highly uncertain, as much will depend on the stabilization of the sociopolitical situation.

Despite the ongoing conflict, the Syrian economy is estimated to have expanded in 2019, mainly because of increased reconstruction activity. However, growth will slow in the near term as economic sanctions result in rising inflationary pressures. Yemen’s economy is projected to expand at a moderate pace, supported by the resumption of crude oil production. The humanitarian crisis in Yemen is expected to deepen, owing to severe damage to the country’s food supply capacity.

Risks and policy challenges
In Western Asia, the main downside risks are a substantial decline in oil prices, further deterioration in the real estate sector, and an intensification of geopolitical risks. Since the unemployment rate is already high, an economic slowdown can trigger social unrest as has been witnessed in 2019. While most of the countries in Western Asia need to embark on fiscal reform measures to restructure their economies, policymakers are also urged to implement policies that help mitigate the adverse impact of these reforms, particularly on the most vulnerable segments of society.