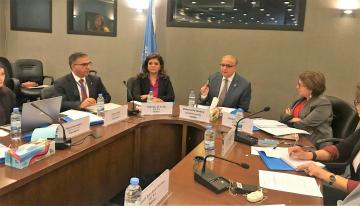 The Economic and Social Commission for Western Asia (ESCWA) has recently welcomed participants at its headquarters in Beirut for a symposium on women and water security for peacebuilding in the Arab region to explore interlinkages between these issues, especially in the context of current geopolitical considerations.

The three-day symposium, organized by the Department for Economic and Social Affairs (DESA) at United Nations Headquarters in New York and in partnership with ESCWA, kicked-off with an opening session that included welcome remarks from the Executive Secretary of ESCWA, Mohamed Ali Alhakim. He noted that the issue of water in the Arab region should be strategized especially given that “there is a cultural side of this issue that needs to be emphasized.”

At a session of the Arab Forum for Sustainable Development (AFSD) organized by ESCWA in April,  regional and international experts tackled water related challenges and highlighted alarming numbers. It was reported that fifty per cent of the Arab region’s infrastructure is responsible for the leak and waste of water, and for every gallon that comes out of the faucet, there is another gallon being wasted.

The Executive Secretary highlighted the importance of interlinkages between Sustainable Development Goals (SDGs) and gender participation. He recalled that women and gender issues are integrated throughout the SDGs and must be addressed.

“If we do not increase women’s participation from 27 to 50 per cent, our region will continue to be behind,” he stated.

Mr. Alhakim said that the symposium is expected to reach a set of recommendations, including suggestions on how countries like Egypt, Sudan, Libya, Iraq and Algeria can benefit from them, along with their cost of implementation.

The Director of the Sustainable Development Policies Division at ESCWA, Roula Majdalani, set the scene regarding the Nexus between water, conflict and gender: “What is in it for the Arab region? We are challenged by unequal access to water and sanitation, by gender discrimination and security issue,” she said.

Ms. Majdalani also underscored the importance of interlinkages between each SDG and noted that they should not be considered individually as many goals, for example, implicitly deal with water issues.

“The issue of human rights to safe drinking water and sanitation is central to the whole agenda, not only in the voice but also in the narrative. Gender balance cuts across the whole agenda. It is an integrated process, the three pillars are there throughout the 17 goals and in addressing the means of implementation,” she added.

In turn, Zafar Adeel, Professor of Professional Practice at the Pacific Water Research Center of Simon Fraser University in Canada, gave a presentation about women and water security for peacebuilding in the Arab region on international and national levels.

He said that armed conflict or environmental disasters may force women and girls to travel longer distances to collect water and noted that while doing so, women and girls often report encountering Sexual and Gender Based Violence (SGBV) and/or harassment.

“An important and often neglected dimension on conflict and post-conflict situations is the impact of water scarcity on resources on gender relations and roles,” he explained. “In many Arab states, there exists an imbalance of power between men and women in terms of access to, and collection and distribution of water resources. Tasks associated with women’s traditional gender norms, such as fetching water, cooking, washing, cleaning may persist during and after conflict despite the increasing burden on women as water availability declines.”

Rapidly increasing rates of population, climate change, and the influx of refugees are other common factors among Arab states that will further raise the risk of water shortages in the future. To meet escalating demands, Arab countries are relying on surface water and groundwater sources as well as alternative ones such as desalinated water and treated wastewater.

The symposium was marked by the participation of 15 women and men from Egypt, Iraq, Jordan, Syria, Sudan, Palestine, Lebanon and Yemen. They shared their experiences related to integrating women and water security programs as well as lessons learned and good practices to improve women’s access to water, sanitation and hygiene (WASH), all of which contribute to peacebuilding and sustainable development.

For more information on the event click here: https://www.unescwa.org/events/symposium-women-water-security-peacebuild...