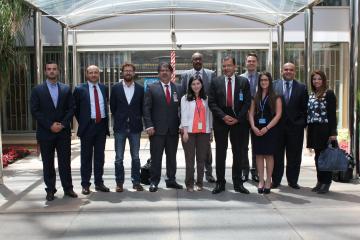 ESCWA held on 8 and 9 May 2017 at the UN House in Beirut an Expert Group Meeting (EGM) to conjure a common scope, definition, working parameters and methodology to qualify and quantify Illicit Financial Flows (IFFs) and trade misinvoicing since, to date, there is no multilaterally agreed upon definition of IFFs or an agreed-on methodology for their measurement.

“Even though there is substantial work from the United Nations system, the World Bank, the International Monetary Fund (IMF), the Organisation for Economic Cooperation and Development (OECD) and civil society on the subject, countries’ inability to reach a political consensus has left the international community without a proper definition,” Director of ESCWA Economic Development and Integration Division Mohamed El Hacene said in his opening remarks.

He added: “As it stands, IFFs in the region have become a matter of major concern due to the scale and negative implications on national capacities to realise the 2030 Sustainable Development Agenda and the Financing for Development Framework (FfD).”

El Hacene concluded that “it is only by combining our efforts together, and by calling forth the very best of all our institutions, that we can move from ambition to action, and deliver effective results.”

Meanwhile, ESCWA Economic Advisor Hisham Taha highlighted that the emphasis placed on IFFs as a major disabler to sustainable development was well grounded in the Addis Ababa Action Agenda (Addis Agenda) which called for redoubling efforts to substantially reduce IFFs by 2030, with a view to eventually eliminate them. Today, IFFs continue to account for substantial resource leakages in developing countries in the order of billions and not anymore just a few millions. These leakages occur through several channels of delivery that, directly and indirectly, affect a country’s ability to raise, and mobilise its domestic resources.

In the same realm, Chairman of the Banking Control Commission Samir Hammoud highlighted that “Combating terror financing and illicit financial transactions is a real challenge to save our countries. This can be made possible only through collective measures on the level of individuals, institutions and governments.”

“Combatting terror financing (…) could be achieved by cooperation and collaboration between the financial institutions in both developing and developed countries,” he underscored, adding that “Money laundry is not concentrated in one part of the world, and its prevention requires detective systems and skilled personnel and this is the responsibility of all financial institutions all over the world.”

“Combatting terror and dirty money is not only a police act but a process of development. Poverty, unemployment, unfair distribution of wealth, unfair tax system, illiteracy, poor education, wars, genocides, corruption, security and political instability are all elements feeding money laundry and terror acts,” he stressed.

Hammoud concluded: “Lebanon appeals to the advanced countries to address the issue of development, peace and prosperity to bridge or at least narrow the rift between the poor and rich economies, which, in our opinion, is the real remedy to illicit acts.”

The meeting identified the elements and components that make up the bulk of IFFs affecting the Arab region, thereby providing a needed premise to advance the findings of the first ESCWA report on IFFs and trade misinvoicing in the Arab region.