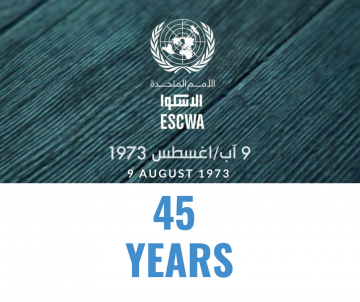 ﻿﻿Marking the 45th anniversary of the United Nations Economic and Social Commission for Western Asia (ESCWA), the Executive Secretary of the commission highlighted the organization’s crucial role in supporting Arab countries to reach the UN Sustainable Development Goals (SDGs) and regional integration.

“Now in its fifth decade, ESCWA is maturing as an institution,” said Mohamed Ali Alhakim. “I am convinced that through hard work, honest and open communication, debate based on sound, factual evidence, and meaningful policy research on economic and social development, we can ensure progress for the millions of children, women and men who call this region home today; we can also strive for lasting prosperity and dignity for future generations.”

Established on 9 August 1973, ESCWA began its work serving 13 member States. Initially located in Beirut, its offices were temporarily relocated to Baghdad and Amman before returning to its permanent headquarters in Lebanon in 1998 and seeing its membership rise to 18 countries.

“Great as the challenges are in the member States we serve, the promise is greater,” Mr. Alhakim continued. “While the pursuit of medium and long-term development goals in the face of immediate conflict can appear dauting, the work of ESCWA helps mitigate the impact of crisis, develop societal resilience, and lays a foundation for social and economic justice.”

Of the many activities that ESCWA undertakes each year to move the 2030 Agenda for Sustainable Development forwards are intergovernmental and multistakeholder consultations, including the Arab Forum for Sustainable Development (AFSD), a high-level regional platform to discuss pathways that allow governments to deliver on the promises made in 2015, when the world unanimously signed on to this ambitious plan.

This programme of work rests on the principles laid out in the United Nations Charter, which calls on regional commissions—under the leadership of the UN Economic and Social Council—to play a critical role in promoting a holistic view of development in their regions, one that balances the economic, social and environmental dimensions of sustainable development in their member States.

“In carrying out our mandate, our watchwords include transparency, integrity and accountability: towards our member States, the international community at large, and most importantly towards the people of the Arab region whom we serve,” the Executive Secretary concluded.

For more information about ESCWA: https://www.unescwa.org/