Our Land, Our Home, Our Future! 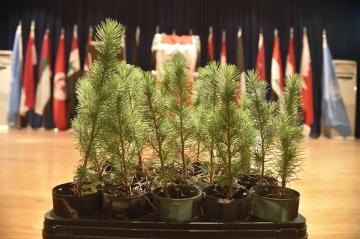 In his first public appearance since his appointment as Executive Secretary of ESCWA Mohamed Ali Alhakim pondered on the ordeals of displacement and migration that have had an impact on more than ten million people across the Arab region. According to him, these ordeals have a negative impact on environmental challenges just as they are affected by them. Moreover, they have aggravated the lack of balance in the distribution of populations and jeopardised economic, social, and ecological situations in many countries. He added that ESCWA is constantly preparing studies and researches as well as follow-up reports; organising national capacity-building programmes to assess the impact of climate change and combat desertification, and other related matters.

The Executive Secretary gave this statement on the occasion of the World Day to Combat Desertification and Drought (WDCD) celebrated at the UN House in Beirut, on 15 June 2017, under the auspices and in presence of Lebanese Minister of Agriculture Ghazi Zaayter. The event was organised in cooperation with the Lebanese Ministry of Agriculture, the United Nations Convention to Combat Desertification (UNCCD), and Issam Fares Institute for Public Policy and International Affairs (IFI) at the American University in Beirut (AUB).

In addition to Minister Zaayter, participants included chairperson of René Moawad Foundation Nayla Moawad and Director of the Climate Change and Environment Program of the IFI at AUB Nadim Farajalla. Miss Lebanon Sandy Tabet also took part in the event with a message for the occasion, while the activity was concluded by Lebanese theatre icon Georges Khabbaz who read a touching poem before shrubs of cedar and pine were offered by the Lebanese Ministry of Agriculture.

The World Day to Combat Desertification and Drought, marked this year under the theme “Our Land, Our Home, Our Future,” is observed on 17June of every year to promote public awareness of international efforts to combat desertification.