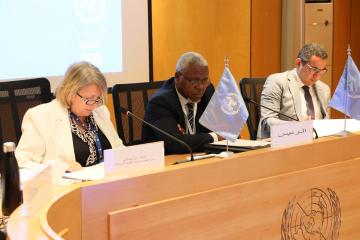 ﻿Beirut, 24 June 2019 (ESCWA)-- The 12th session of the Committee on Energy of the United Nations Economic and Social Commission for Western Asia (ESCWA) kicked off this morning at the UN House in Beirut with the participation of representatives from member States, relevant international and regional organizations, as well as concerned energy experts.

In the two-day meeting, participants will discuss the progress made since the 11th session of the Committee; developments in the energy sector in the Arab region; the Arab cooperation in dealing with climate change; the progress in the implementation of energy-related Sustainable Development Goals (SDGs) in the Arab region; and the proposed 2020 programme plan for integrated management of natural resources for sustainable development.

Following the opening session, the bureau of the 12th session was formed in accordance with the Arabic alphabetical order employed by the UN, whereby the Jordan assumed chairmanship, the Mauritania and Bahrain assumed the vice-chairmanship, and Iraq the role of rapporteur.

Roula Majdalani, Director of the ESCWA Sustainable Development Policies Division (SDPD) said that since the Committee on Energy concluded its 11th session, national, regional and international efforts have been exerted to implement the 17 SDG, which cover all aspects of development in its socio-economic and environmental dimensions. This will lead to ensuring decent life for all through achieving social justice and balanced economic growth among regions and sectors.

Majdalani also said that due to the importance of the energy sector in achieving SDGs, the Arab region needs to address the challenges facing this sector, namely: the rise in the demand for energy, which may continue for years to come amidst population growth; the increase in the number of displaced people from conflict zones to neighboring countries; 30 million people lack power, most of whom live in rural areas, especially in least developed countries, where there is also lack of gender equality; the dependence of energy-exporting and importing countries on fossil fuels; the problem of traditional energy, which carries economic, environmental and social dimensions in terms of financial cost, volatility of foreign markets, consumption patterns and increased carbon footprint.

Majdalani noted that although many countries have begun reforming their energy sector, albeit at varying levels, much remains to be done. The shift to renewable energy and energy efficiency requires activating legislation and incentive policies to attract investment. It also requires supporting research and development; technology transfer; capacity building; localizing appropriate technology industry; modernizing infrastructure; and adopting relevant specifications and standards.

Majdalani concluded that ESCWA supports countries through its programs in translating their commitments into realistic actions to achieve SDGs related to the energy sector. In its work programme for the biennium 2018-2019, ESCWA had carried out many activities in the areas of integrated natural resources management to improve water, energy and food security; to ensure the transition to sustainable energy systems; to enhance the ability to adapt to climate change and mitigate it; and to integrate SDGs into national and regional policies.

The 12th session of the Committee on Energy offers member State representatives a platform to discuss issues including progress in implementation of energy-related SDGs and targets in the Arab region; mainstreaming those Goals and targets into national development plans; the water-energy-food nexus; regional cooperation in climate change issues; and the activities of the ESCWA Group of Experts on Fossil Fuel.