Most comprehensive report to date on women’s participation in political life in Iraq: Challenges and ways to overcome them 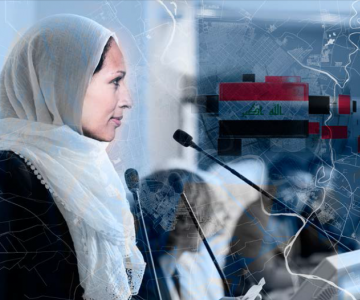 ﻿Beirut-﻿Baghdad, 1 November 2020--Women's participation in political processes in Iraq is hampered by many obstacles, despite Iraqi women’s determination to engage in the public sphere. In 2020, Iraq ranked 70th worldwide in terms of women holding seats in parliament.

These findings are highlighted in a new report issued today by the United Nations Assistance Mission for Iraq (UNAMI), the United Nations Economic and Social Commission for Western Asia (ESCWA) and the Iraq Foundation, which documents the challenges faced by women running for elected public office and the factors influencing voter choices regarding women candidates. The report also proposes a set of recommendations to overcome these challenges.

“Women’s meaningful participation does not just mean increasing the numbers of women in public life – although that’s a good start! It also means pursuing pro-women legislation; it means politics that address issues of concern to women, such as domestic violence; it means removing barriers that impede women’s equal participation in decision-making. The research study that we are discussing today provides a compelling picture of the challenges women encounter when entering politics, suggests what could help them move ahead; and identifies areas where some simple changes would make a huge difference to women’s access to the political arena,” explained UNAMI’s Deputy Special Representative Alice Walpole.

In addition to quantitative data, the report relies on a large number of interviews and focus groups with women professionals, current and previous members of parliament and of provincial councils, and civil society and human rights activists in Iraq. It reveals the different types of constraints on women’s participation in political life, including socio-cultural constraints such as prevailing traditional stereotypes or traditional gendered divisions of labour; political constraints, with a quota system being implemented to increase women’s participation rates; and economic and financial constraints including lack of funding for the political campaigns of women candidates.

“It is time for policymakers in Iraq to acknowledge that women’s meaningful political participation is not a luxury or a gift. It is an inseparable part of establishing real democracy, justice and equality for all,” underlined Iraq Foundation President Rend Al-Rahim.

Some of the challenges faced by women are of bureaucratic and structural nature, such as the media’s portrayal of women as inadequate and ineffective. Women are often excluded from decision-making in sensitive sectors relating to security and conflict resolution negotiations. Women candidates also face discouragement or even intimidation from family and society, and threats by opponents and challengers.

However, the report underlines that, despite these tremendous challenges, practical experience shows that women have proven their ability to manage State affairs and are also viewed as transparent, credible, efficient, responsible, honest and accurate.

“We call for the promotion and dissemination of a culture of gender equality and for the inclusion of women’s participation among policy priorities to consolidate the values of equality, justice and democracy. It is also very important to establish a national machinery for the advancement of women,” highlighted Leader of the Gender Justice, Population and Inclusive Development Cluster at ESCWA Mehrinaz Elawady.

The launch of the report will be followed by training courses for women interested in taking up a role in Iraqi public life, in addition to training for media professionals to explore their role in reporting on women’s political activism.

About UNAMI
The United Nations Assistance Mission for Iraq (UNAMI) is a political mission established in 2003 by United Nations Security Council resolution 1500, at the request of the Government of Iraq. UNAMI’s mandate is to advise and assist the Government and people of Iraq on advancing inclusive political dialogue and national reconciliation, assisting in the electoral process and in the planning for a national census, facilitating regional dialogue between Iraq and its neighbours, and promoting the protection of human rights and judicial and legal reforms. UNAMI also advises and assists the Government of Iraq in ensuring the participation, involvement and representation of women at all levels.

About the Iraq Foundation
The Iraq Foundation is an independent non-governmental organization dedicated to supporting democratic transition, civil society and human rights in Iraq, including the rights of Iraqi women.

Women Running for Elected Office in Iraq: Needs and Challenges
Tweets by @UNESCWA