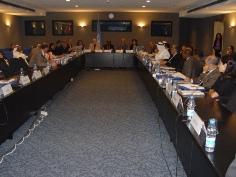 On 14 October, the UN-ESCWA Statistical Committee opened its 8th session at the UN House. Attending the meeting were delegations from Jordan, the United Arab Emirates, Oman, Palestine, Qatar, Iraq, Kuwait, Lebanon, Egypt, Saudi Arabia, Yemen and Sudan. Also present were representatives of specialized UN organizations, and regional and international non-governmental organizations (NGOs).
Key speakers at the opening session were the president of the Egyptian delegation, Abu Bakr Al Jundi, Head of the Egyptian Central Agency for Public Mobilization and Statistics, whose country assumed the vice-chairmanship of the 7th Session, in the absence of the representative of Syria, which assumed the chairmanship of the 7th Session, and Anhar Hegazi, Chief of the UN-ESCWA Sustainable Development and Productivity Division, representing Executive Secretary Bader Omar AlDafa.
Jundi
In his address to the Session, Jundi said "what our world is witnessing in fast changes, food crises, climate change, the new economic world order, and the day-to-day price fluctuation, requires increased steadfast statistical work in our region to bolster statistical capacities in countries of the region, so they can answer growing demands to go forward with development programs, face challenges, and measure progress in our Arab societies".  Jundi also said that the issues on the Committee’s agenda bear special importance for the region. He praised the work UN-ESCWA is doing to uphold statistical the capacities of its member countries, and considered that such effort helps in empowering common statistical work among these countries.
Hegazi
Hegazi then delivered the speech of UN-ESCWA Executive Secretary, Bader Omar Aldafa, which read "statistics constitute a basis for social and economic analysis and policy-making. For this reason, it is crucial to have comprehensive, high-quality, independent, common and available information on development variations and indices in the ESCWA region. This ensures that the decision both answers the needs and is responsible. The growing importance of statistics in the ESCWA region requires the identification of appropriate priorities and the availability of human and financial resources to collect statistics on the national and regional levels. UN-ESCWA has made great efforts in this direction in cooperation with member countries. However, despite the many successes, the path ahead is still long".
Election of Officers
Following the opening session, officers were elected. Yassine Hajj Abdeen, Director-General of the Sudanese Central Bureau of Statistics, was elected as chairman of the Session, while Ali bin Mahboub Al Raissi,  Director General for Population Census and Social Statistics at the Omani Ministry of National Economy, and Mahdi Mohsen Ismail Allaq, Head of the Iraqi Central Organization for Statistics and Information Technology (COSIT), were both elected vice-chairmen. Abu Bakr Al Jundi was elected, for his part, as rapporteur.
At its eighth session, which concludes today, Thursday 16 October, the Statistical Committee aims to provide an official framework for achieving a common stance regarding the statistical topics under discussion, in order for them to be brought to the attention of the United Nations Statistical Commission. It also aims to consolidate cooperation with other regional organizations in view of new statistical initiatives in the region, review the programmes and activities that are being undertaken by the Statistics Division, and devise recommendations on developing such programmes, with a view to strengthening the statistical capacities of member countries.
Tweets by @UNESCWA