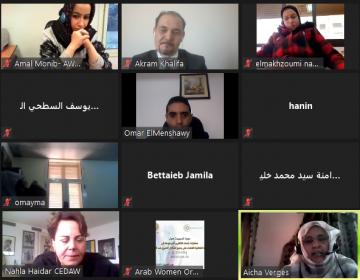 The training aimed at developing the capacity of national women’s machineries (NWMs), other relevant governmental bodies and institutions, and civil society organizations in Algeria, Libya, Mauritania, Morocco, the Sudan and Tunisia, on preparing national reports using the latest methodologies and technologies. The training also tackled means for engaging in a constructive dialogue with the CEDAW Committee.

“The periodic national reports that the States submit to the CEDAW Committee intersect with other types of follow-up reports on progress made in the status of women and sustainable development,” said Mehrinaz El Awady, Leader of the Population, Gender Justice and Inclusive Development Cluster at ESCWA.

Twenty-five participants discussed the Convention as an essential part of the international human rights framework. They were also introduced to the mandate and bylaws organizing the work of the CEDAW Committee and they learned the way national reports need to be prepared, submitted and discussed with the Committee.

“The preparation of such reports constitutes a burden on Governments, and both training organizers and recipients are keen to enhance the required national capacities,” El Awady added.