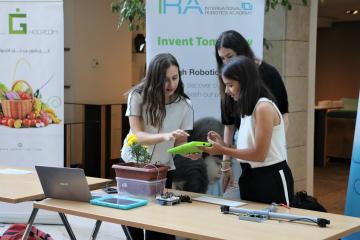 ﻿﻿﻿Beirut-Amman, 31 July 2019 (ESCWA)--While the Arab region continues to suffer from conflicts, water scarcity and all sorts of economic challenges, young people and experts from all over the region keep exerting efforts to find sustainable solutions based on innovation. This was the focus of the two consecutive meetings organized by ESCWA Technology Centre (ETC) in Amman, Jordan, on 29-31 July, making a step further towards tapping into green technology to improve agriculture and conflict waste management.

The 7th meeting of the ETC technical committee and the expert group meeting, held on Green Technology Transfer, Adaptation and Investment required for the implementation of the Sustainable Development Goal (SDG) 12 on sustainable consumption and production, were organized in cooperation with the Climate Technology Center and Network (CTCN), UN Technology Bank for LDCs and Arab Industrial Development and Mining Organization (AIDMO).

The ETC Executive Director, Ms. Reem Nejdawi, said at the end that one of the most important achievements was the connection made among the various participants and the exchange of expertise and new horizons between young innovators and experts. She underscored that the meeting reached several concepts of projects that can be done on green technology in agriculture and conflict waste management in the region, in addition to a project to support least developed countries.

Participants included technical experts from the region in various sectors engaged in technology related fields, representing stakeholders from the academic and research institutions, agricultural, industrial, and public and private sectors, as well as international experts and organizations.

Discussions revolved around the key priorities of green technology which aims to reduce the impact of human activity on the environment, ways to fund it and what hampers investing in it. In this context,
the Regional Manager of CTCN, Mr. Rajiv Garg, noted that the big problem for climate and green technology financing lies in the fact that countries are not able to identify and prioritize what they really need.

On including green technology in sustainable consumption and production strategies and implementation, the coordinator of the environment task force at the Lebanese Ministry of Environment, Ms. Lamia Mansour, said that work at the policy level is underway and has gone great lengths, adding that innovation and green technology are highly important to the region, and open timely horizons to the future at the levels of economy, society and environment.

Participants also discussed employment opportunities through green technology. The Secretary-General of the National Council for Scientific Research (NCSR), Mr. Mouin Hamze, introduced the initiative “DAWReK’N” by the National Observatory for Women in Research hosted by NCSR, which aims to support Lebanese female researchers.

In addition, conferees discussed the findings of two technical reports underway about the transfer, adaptation, and investment in green technologies to implement SDG 12. All reviews will be taken into consideration before their issuance next September.

Interactive exhibition
On the sidelines of the meeting, an interactive exhibition showcased examples of green technologies that could be applied in member countries to enhance the implementation of SDG 12. Around eleven innovators participated in the exhibition, namely the Integrated Eco Stone Company; the Jordan Environment Organization; the Royal Scientific Society; the International Robotics Academy (IRA); Massafat Agricultural Association; Ghoorkom, from Jordan; Nawa Group from Oman; and Compost Baladi from Lebanon.

In her statement, Majdalani noted that “Green technology raises the efficiency of various productive sectors and safeguards natural resources in our region such as water and agricultural lands, while enabling to create new jobs for a new generation that is well-versed in the new technologies. It also lures investments in promising sectors, namely for an increasing number of small and medium enterprises working on corporate social responsibility.”

Meanwhile, Jalloul said that the coordination committee of the industrial research centres in Arab states is an advisory entity operating under AIDMO and has a lot in common with ETC. Both aim to increase coordination and networking between research and technology centres in the Arab region and to focus on various technologies in the key priority sectors such as energy, water, agriculture, environment and others.

Technology for agriculture
While agriculture does not contribute to the gross domestic product with more than 10%, it consumes up to 80% of water resources in a water scarce region with limited agricultural lands. However, it is a vital sector that secures income to around 40% of Arab rural communities.

As the exhibitors showed that there are numerous ways to put technology at the service of agriculture, the Associate Professor at the Water, Energy and Environment Research Center at the University of Jordan, Ms. Arwa Hamaideh, highlighted the fact that not every innovation necessarily means high-end technology, but might also involve old or traditional structures that are still available and in good use across the Arab region, namely to harvest rain water in winter to use it in summer. She pointed out that fog collection might also be one of the solutions, referring to a very successful experience in Oman.

Conflict waste management
According to ESCWA, in addition to the colossal human fatalities and material damage, wars in the Arab region have left a large amount of debris that threaten public safety if remained untreated. Waste left by conflicts in Mosul for instance have exceeded 10 million tons.

In this context, Salah Sabbar Thameel, a civil engineer from Al Anbar university in Iraq, presented a research he recently carried out in Al Anbar, where he found out there is 12 million cubic metres of rubble resulting from wars with the Islamic State of Iraq and Syria (ISIS).

“I took samples from the rubble, crushed them and used them as a subbase material underneath concrete as a street pavement. Chemical and other tests succeeded. All we need is fixed crushers to get rid of these debris and save the area from further pollution and cancer risks, which is less costly than getting raw material,” he said.

For his part, the Director General of the Environment Quality Authority in Palestine, Mr. Zaghlouol Samhan, dubbed this issue as urgent and highly significant, namely in Gaza Strip, given the millions of tons of rubble and construction debris left behind after the strikes carried out during the successive aggressions.

The meeting provided guidance on the focus areas of ETC and its work programme for the coming years based on the identified key technological priorities and participants were informed on ETC progress in the work plan.

The outcome and key messages of the technical committee will be used to develop the ETC proposed work program for the coming years, which will be, alongside the report of the meeting, further reviewed and discussed by ETC Board of Governors in their next regular meeting in November 2019.