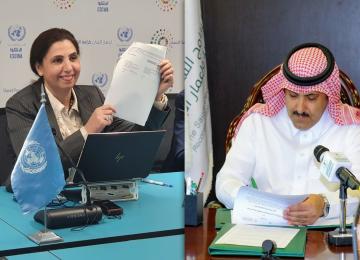 Beirut-Riyadh, 30 November 2020--Yemen has been struggling for decades with multiple challenges, including a fragile infrastructure, and high rates of poverty and food insecurity, which have placed it among the world’s least developed countries. This situation has prompted international and regional organizations concerned with development in Yemen to work together on formulating development programmes to address these challenges, including through studies, research and projects aimed at combating poverty and achieving the internationally agreed development goals. The ultimate objective is to improve living conditions in Yemen through effective development contributions.

In this context, the United Nations Economic and Social Commission for Western Asia (ESCWA) and the Kingdom of Saudi Arabia have sought to fund and enrich the forthcoming United Nations report on least developed countries with comprehensive analyses on development progress made throughout the past decade in least developed countries. The report will address the case of four Arab countries, including Yemen.

To fulfill this goal, the Saudi Program for the Development and Reconstruction of Yemen (SPDRY), represented by its General Supervisor, H. E. Ambassador Mohammed bin Saeed Al Jaber, and the United Nations Economic and Social Commission for Western Asia (ESCWA) represented by the Under-Secretary-General of the United Nations and Executive Secretary of ESCWA, Dr. Rola Dashti, today signed a partnership agreement.

During the signing ceremony, Ambassador Al Jaber affirmed the Kingdom of Saudi Arabia's keenness to harness all efforts in various fields to support Yemen and its people, explaining that “the developmental approach that the Kingdom is pursuing to help the Yemeni people sends a clear message that the Kingdom deals with neighboring countries through unwavering efforts for their development and stability".

During a previous press statement, Ambassador Al Jaber had underlined that "a large part of the work of SPDRY consists of capacity-building, which intersects with the work of ESCWA. Today, we are exerting incessant efforts to develop Yemen’s infrastructure and support inclusive development, in continuation of our efforts in the previous decades".

This partnership between SPDRY and ESCWA was sealed after an ESCWA delegation visited SPDRY headquarters and was briefed on the Program’s strategy and mechanisms for the development projects that it is implementing in various Yemeni governorates. "The Kingdom of Saudi Arabia plays a leadership role, backed by its humanitarian and development commitment towards its neighbors," said ESCWA Executive Secretary Rola Dashti after that visit, praising SPDRY development efforts.

In line with the Kingdom of Saudi Arabia’s continuous support for development in Yemen, SPDRY decided to provide funding for the United Nations report, which will include studies and research carried out by ESCWA and is aimed at formulating a road map for development in Arab least developed countries. The report will detail efforts by the Kingdom of Saudi Arabia, other Arab countries, and the regional and international community to provide support and humanitarian and development assistance to these countries. Building on its findings, a comprehensive ten-year strategy will be developed to achieve the Sustainable Development Goals.

This report will also suggest mechanisms to build resilience and address the chronic, multifaceted issues that the selected countries face, and most of all help them embark on the path of inclusive sustainable development. A path that will be followed based on best practices in development support to Yemen, through joint action that contributes to achieving stability and accelerating economic recovery.

About the Saudi Program for the Development and Reconstruction of Yemen (SPDRY)
King Salman bin Abdulaziz Al Saud issued a royal decree in 2018 ordering the establishment of the Saudi Development and Reconstruction Program for Yemen (SDRPY), a strategic initiative that aims to provide economic and development support across all sectors in Yemen, contribute to improving infrastructure and basic services available to the Yemeni people and create job opportunities, through cooperation with the Yemeni government, local authorities and civil society organizations.