Preparation for the Sudan Housing and Population Census 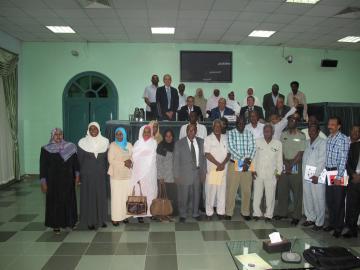 In the framework of the ESCWA technical cooperation with member countries, and at the request of the Republic of Sudan, the regional commission held on 1 and 2 June 2016 in Khartoum a consultative workshop on the use of technology for the general Population and Housing Census 2018, and relayed the experience of Jordan in the use of technology along the phases of the census.

Participants in the census were the ESCWA delegation, along with a delegation from the Jordanian Department of Statistics and the firm that carried on the census in Jordan.

The visit concluded with recommendations, including mainly a call to the Central Bureau of Statistics to establish a technical committee that would communicate with relevant government stakeholders and benefit from the experience of the United Nations Human Settlements Programme (UN HABITAT) to decide on the use of technology in the census and evaluate the cost in this case; a call to support the working group with the right resources to carry out the census, namely through technology, maps, the drafting of the questionnaire, quality control, and the media strategy that would accompany the implementation of the census. It was also recommended that technical cooperation continue on the issue of census in Sudan for the next three years.

The general Population and Housing Census is considered a pillar of nation-building. It is essential for all socio-economic planning processes, as it includes demographic, social, and economic data and characteristics of the population. The results of the census can be used for example to guarantee the just distribution of government services such as education and health.