Losses exceeding $442 billion and millions in need of humanitarian assistance: the catastrophic repercussions of 8 years of war in Syria 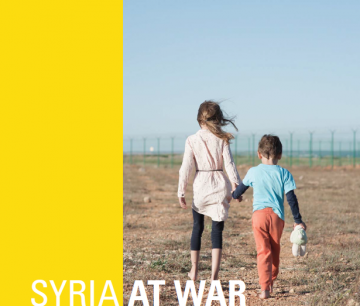 ﻿Beirut, 23 September 2020--By the end of the eighth year of conflict in Syria, economic losses had exceeded an estimated $442 billion. However huge, this number alone does not epitomize the suffering of a population among which 5.6 million people were registered as refugees and 6.4 million as internally displaced; 6.5 million were experiencing food insecurity; and 11.7 million were still in need of at least one form of humanitarian assistance.

Those are only a few of the repercussions of conflict detailed in the “Syria at War: Eight Years on” report, issued today by the National Agenda for the Future of Syria (NAFS) programme of the United Nations Economic and Social Commission for Western Asia (ESCWA), and the Center for Syrian Studies at the University of St Andrews.

Covering the period 2011-2019, the report reveals that nearly 3 million children inside the country were out of school during the 2017-2018 academic year. The conflict has torn the social fabric and caused losses in human development, downgrading Syria’s status from medium human development to low human development.

In their foreword, ESWA and the University of St Andrews point out that “the consequences of the conflict for the economy and social fabric pose daunting future challenges: whether it is production, investment or human development, the conflict has cost the country its hard-won socioeconomic gains”.

The report shows that 82% of conflict-induced damage was accumulated in seven of the most capital-intensive sectors, namely housing, mining, security, transport, manufacturing, electricity and health. It estimates the value of physical capital destruction at $117.7 billion and the loss in gross domestic product (GDP) at $324.5 billion, thus placing the macroeconomic cost of conflict at about $442.2 billion. The report also cites official data according to which, by the end of 2018, real GDP had lost 54% of its 2010 level.

As for trade, the report underlines that Syrian exports witnessed a collapse, from $8.7 billion in 2010 to $0.7 billion in 2018, resulting from disrupted production and trade chains. Infrastructure damage, the restrictive unilateral economic sanctions imposed by the United States of America and the European Union, and physical, financial and human capital flight out of the country are among the contributing factors to this collapse. Imports, however, did not witness a comparable fall, which has widened the trade deficit and generated increasing pressure on the value of the Syrian pound (SYP).

The report also provides an overview of the repercussions of the conflict on governance and the rule of law, and of the different manifestations of its internationalization. It outlines some principles of peacebuilding, highlights challenges for recovery then suggests ways out of the deadlock.

The two author institutions underline that the adoption of policies that directly improve quality of life for all Syrians, the inclusion of a broader spectrum of Syrian voices and revival of Syrian societal initiatives, and enhanced joint economic, cultural and social cooperation at the local level are key to rebuilding the country and refocusing efforts towards realizing the 2030 Agenda for Sustainable Development.

In 2016, ESCWA and the University of St Andrews had published a first report entitled “Syria at War: Five Years on”, which had estimated economic losses incurred by the country at about $259.6 billion.

About the University of Saint Andrews
Founded in 1413, Saint Andrews is Scotland's first university and the third oldest in the English-speaking world. The Center for Syrian Studies is part of its School of International Relations.