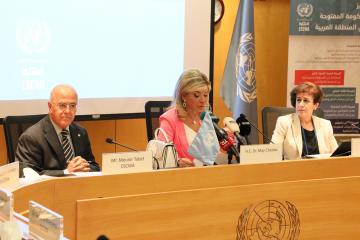 Beirut, 2 July 2019 (ESCWA)— Lebanese Minister of State for Administrative Reform May Chidiac today praised the synergy that exists between Lebanon and the United Nations Economic and Social Commission for Western Asia (ESCWA). The presence of the Commission in Lebanon has rendered it the general UN Headquarters in the Arab region and the most suitable setting for intellectual interaction. Chidiac commended the activities of the Commission and the importance of its meetings as it holds more than 200 conferences annually that contribute to the economic activity in Lebanon.
Chidiac was speaking at the opening session of a three-day regional workshop on “Open Government and Emerging Technologies in the Arab Region” held by ESCWA under her patronage.

Chidiac said that open government has become part of the daily discourse of the public sector in Lebanon as well as the local and international organizations, although the required qualitative shift in applying the principles and basics of the open government is not that easy. Governments are responsible to give citizens the right to access information easily, and citizens have the right to ask for information if needed.

She added that governments are also responsible to involve the citizens in decision-making by continuously communicating with them, especially because developing an open government that holds the government accountable and protects the rights of the citizens requires a dynamic society.

Tabet pointed out that despite the challenges faced by Arab countries, open governments are being developed gradually, a number of initiatives focusing on open data are being implemented and three countries have joined the Global Open Government Partnership, namely: Jordan, Morocco and Tunisia. In this context, ESCWA has provided an integrated framework for the application of the open government in compatibility with the situation of the Arab countries in various fields, such as technology investment, e-government, legislative status, as well as the culture of the Arab society and the interaction of citizens and non-governmental organizations with the public sector.

It is worth noting that this workshop is the second one organized by ESCWA under a broader project entitled "Institutional development for better service delivery towards the achievement of the sustainable development goals in Western Asia" launched in 2016.

The workshop activities will be based on the capacity development materials developed by ESCWA on open data and on participation, collaboration and engagement, as well as the Commission’s study on an open government policy framework for Arab countries.