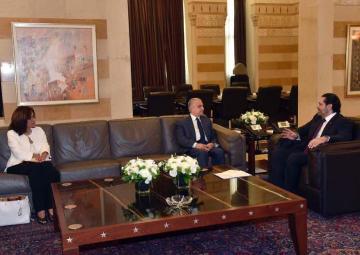 ﻿﻿Lebanese President of the Council of Ministers Saad Hariri received on Friday 23 June 2017 United Nations Under-Secretary-General and ESCWA Executive Secretary Mohamed Ali Alhakim, accompanied by his Deputy for Programme Support Khawla Mattar, in a courtesy visit shortly after he assumed office on top of the Commission.

Following the meeting, Alhakim said, "We discussed the role of ESCWA and the importance of its stay in Beirut. We also tackled a number of projects on which we cooperate with the Lebanese government in women issues and agricultural, economic, and social fields. We also looked into ESCWA headquarters that is currently under discussions."

Picture courtesy of the Presidency of the Council of Ministers website