ESCWA observes the International Day of Solidarity with the Palestinian People 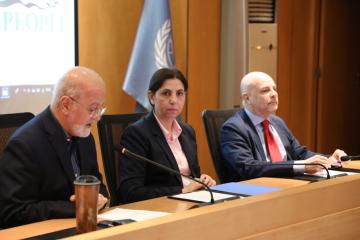 ﻿Beirut, 2 December 2019 (ESCWA)--The Economic and Social Commission for Western Asia (ESCWA) held a ceremony at the United Nations House on 29 November 2019 to observe the International Day of Solidarity with the Palestinian People. Mr. Claudio Cordone, Director of the United Nations Relief and Works Agency for Palestine Refugees in the Near East (UNRWA) Affairs in Lebanon, participated in the ceremony.

The Executive Secretary of ESCWA, Ms. Rola Dashti, delivered the message of the Secretary-General of the United Nations for the occasion, in which he reiterated that Israeli settlement activity in the occupied Palestinian territory constituted a flagrant violation of international law, reaffirming the commitment to upholding the rights of the Palestinian people.

The statement of ESCWA, delivered by Mr. Mounir Tabet, Deputy Executive Secretary, highlighted the suffering of the Palestinian people in the occupied Palestinian territory and around the world. It also expressed admiration for the steadfastness of the Palestinian people and their resistance to the injustices imposed on them, and reaffirmed the responsibility of the international community to support them in their efforts to attain their rights and uphold the values of justice, equality and freedom.

In his remarks, Mr. Cordone warned about the diminishing prospects of the establishment of a Palestinian State due to Israeli policies. He affirmed that the political and moral support that UNRWA was receiving would not be enough to continue to provide humanitarian assistance to the Palestinian people, if funding shortages were not addressed. He finally thanked Lebanon for continuing to host Palestinian refugees and stressed the need for action by its Government to ensure that they enjoy some of their most basic rights, until they are able to exercise their right of return.

On the sidelines of the Int'l Day of Solidarity with the #Palestinian People, Claudio Cordone, Director of @UNRWA Affairs in Lebanon, says that establishing peace shoud be the unifying aim of all of UN entities' efforts in the region. pic.twitter.com/BSL6VKZJwj

A presentation by Mr. Tarik Alami, Director of the ESCWA Emerging and Conflict-related Issues Division, highlighted the impact of the Israeli occupation on the living conditions of the Palestinian people, and the Israeli policies and practices of discrimination, collective punishment, forcible transfer, and excessive and unlawful use of force. The Gaza blockade, the killing of demonstrators and settlement activity in the West Bank and East Jerusalem are examples of such policies.

The ceremony was concluded by a screening of two short films: My Dream (by Al-Haq Foundation) and One Year After Start of Great March of Return (by the Palestinian Centre for Human Rights), as well as a video clip of the song Be There by Ibrahim Nasrallah, which was released earlier this week to commemorate the International Day for Solidarity with the Palestinian People.