ESCWA Launches Arab Decade of Sustainable Energy for All from Amman 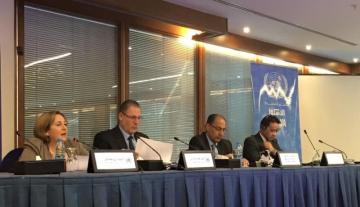 The launch took place under the auspices of Jordanian Minister of Energy and Mines Resources Ibrahim Seif who delivered the opening statement. Also speaking at the opening were ESCWA Deputy Executive Secretary Abdalla Al-Dardari, and Director at the UN Secretary-Generalâ€™s Sustainable Energy for All initiative (SE4All) Minoru Takada who spoke on behalf of Kandeh Yumkella, the Secretary-Generalâ€™s Special Representative for Sustainable Energy for All.

"Our future is dependent on our ability to formulate a balanced energy equation built around an integrated system, of efficient use of resources, technology development, and conservation, in which matches environmental needs and secure supplies and energy services to all Arab population, and this requires efforts to achieve rapid transition toward just and sustainable energy systems," Al Dardari said.

"If we are to succeed at what the General Assembly has set out to do at the global level, you â€“ the regional, national and local levels â€“ hold the key to realisation," said Takada.

Takada also congratulated the Jordanian host government and ESCWA on their strong leadership at a crucial point in time.

Minister Seif said, "Energy is the main and vital driving force for all the other sectors. It is critically essential to progressively implement policies and reforms to enhance the sustainability of the energy sector." He added that Jordan has adopted policies of energy resources diversification and energy sustainability, noting that life without energy was impossible, as this sector directly impacted human lives."