ESCWA Committee on Women concludes its 9th session in Amman 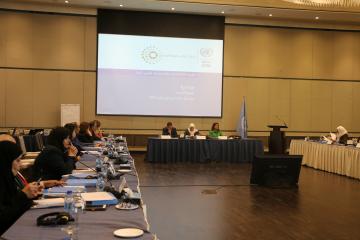 ﻿Beirut-Amman, 27 November 2019 (ESCWA)--Today, the ninth session of the Committee on Women of ESCWA concluded with a series of recommendations on the advancement of women’s rights, with a focus on the pathways that Arab countries took to implement the Beijing Declaration and Platform for Action 25 years after its adoption.

The recommendations focused on utilizing the knowledge and training manuals issued by ESCWA, continuing to outline and develop legislation, stimulating the role of the private sector and continuing to develop tools to provide data on indicators related to violence against women.

Participants included representatives of ESCWA member States, the League of Arab States (LAS), the Arab Women Organization (AWO), the United Nations Entity for Gender Equality and the Empowerment of Women (UN-Women), as well as participants who work in national women's machineries, line ministries, and councils and government organizations on women.

They went over several issues regarding gender justice in the Arab region such as gender equality and the empowerment of women in national institutions, combating domestic violence, in addition to removing barriers and increasing the number of women in the judiciary.

In her opening speech, Director of the ESCWA Centre for Women, Mehrinaz El Awady, highlighted the necessity of achieving gender equality since it will have a direct impact on advancing economic and social development. “However, this can only be done by prioritizing the protection of the marginalized people through parallel paths,” she stressed.

Dr. Amal Hamad, Minister of Women's Affairs in Palestine and Chairperson of the eighth session of the Committee on Women, spoke about the importance of the ESCWA project to estimate the cost of violence against women, since it has a major impact on national policies to protect women, especially in light of the serious challenges that undermine sustainable development efforts in the region, the most important of which is the continuation of the occupation through the siege on the Gaza Strip, which "led to the increase of poverty rates to more than 53%", in addition to the "continuing violations against prisoners…"

Hanadi al-Shafei, head of the treaty committees section at the Qatari Ministry of Foreign Affairs, assumed the chairmanship of the ninth session of the Committee on behalf of her country, and stressed in her statement the importance of cooperation in the field of women empowerment, commended the role of ESCWA in the region, and reaffirmed Qatar's support to the Commission. She also highlighted the "importance of building strong and effective institutions that provide protection to women and those concerned with women's justice and ensuring their rights as an essential pillar for achieving gender justice."