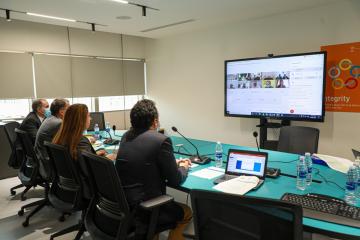 ﻿﻿Beirut-Riyadh, 4 February 2021--The United Nations Economic and Social Commission for Western Asia (ESCWA) and the Saudi Development and Reconstruction Program for Yemen (SDRPY) today held a meeting with the Government of Yemen and regional and international partners, including the Arab Gulf Programme for Development (AGFUND), the Arab Bank for Economic Development in Africa (BADEA), the Islamic Development Bank (IsDB), the Arab Fund for Economic and Social Development and the World Bank, to discuss development challenges faced by Yemen and requirements for the post-conflict phase. The ultimate goal is to help the country transition from the humanitarian relief and assistance phase to a sustainable development path.

The meeting forms part of a regional process launched by ESCWA, in partnership with SDRPY, to help Arab States prepare for the Fifth United Nations Conference on the Least Developed Countries (LDC5) to be held in January 2022. The Conference is set to adopt a new agenda till 2030 for LDCs, succeeding the Istanbul Programme of Action for the Least Developed Countries for the Decade 2011-2020 (PoA), which was adopted in 2011. It will be preceded by national and regional reviews of PoA implementation and of the extent to which its goal has been met, namely overcoming structural challenges in LDCs with a view to eradicating poverty and implementing internationally agreed development goals.

In her opening address, ESCWA Executive Secretary Rola Dashti affirmed: “The financing gap is a major obstacle to development in the Arab LDCs. At the same time, Gulf States are among the major contributors to flows of official development assistance (ODA) provided through bilateral or multilateral institutions. We are working towards defining a common position of our region’s countries towards the new programme of action for least developed countries.”

In turn, SDRPY General Supervisor Ambassador Mohammed bin Saeed Al Jaber underlined that “the meeting is an opportunity to review achievements in the past decade through an objective discussion on the challenges of the development process in Yemen, and to exchange views with the Government of Yemen, major donors, and specialized regional and international organizations on their assessment of those development achievements and challenges. The meeting is part of a collaborative effort with ESCWA, which the Program has contributed to and supported, to prepare a comprehensive report on four Arab LDCs, including Yemen, through discussion with development partners on the requirements of the next development phase in Yemen and what it entails in terms of comprehensive development visions and strategies.”

Participants reviewed the implementation of the Programme of Action for the Least Developed Countries for the Decade 2011-2020 for Yemen, highlighting obstacles faced by the Government and its development partners in rolling out development programmes, including the COVID-19 pandemic. They did so on the basis of an ESCWA report on the subject covering four Arab LDCs, namely Mauritania, Somalia, Sudan and Yemen. They also underlined the priorities that should be included in the upcoming programme of action for the LDCs from the Yemeni perspective. In addition, participants identified the national competencies that should be developed for responding to internal challenges and cross-border shocks, such as the pandemic, locust invasions or natural disasters, and improving the Government’s capacity for better aid absorption and coordination.

Yemen’s Minister of Planning and International Cooperation Waed Abdallah Badhib highlighted the repercussions of crises and conflict on his country, including a sharp decline in economic activity, a contraction of more than 50% of the gross domestic product (GDP), a loss of more than $100 billion in the past six years for the economy, and a rise in the poverty rate to 78% of the population. “I must commend the support and assistance received from all parties helping Yemen so that it can emerge from the conflict spiral, graduate from the group of least developed countries and transition towards reconstruction, development and peace," he concluded.

The meeting also tackled requirements for the post-conflict phase in Yemen and what they entail in terms of comprehensive development visions and strategies, and of capacity-building, to enable Yemeni institutions to effectively contribute to recovery, reconstruction and stability, and coordinate efforts of local, regional and international partners. This would lead to kickstarting the implementation of plans and programmes required for that phase, in coordination between the Government of Yemen and its different development partners.

The meeting will be followed by a regional one organized by ESCWA in cooperation with SDRPY to discuss the findings of the ESCWA report on the implementation of the Programme of Action for the Least Developed Countries for the Decade 2011-2020 in Arab LDCs, in order to support preparations for the Fifth United Nations Conference on the Least Developed Countries through unifying the Arab position towards the next programme of action for LDCs, facilitating dialogue among development partners and aid recipients, and promoting an integrated approach to humanitarian assistance, peacebuilding and sustainable development.

About the Saudi Development and Reconstruction Program for Yemen (SDRPY)
A specialized programme established by King Salman bin Abdulaziz Al Saud in 2018, SDRPY is a continuation of development projects and programmes undertaken by the Kingdom for the benefit of Yemen in the past decades. SDRPY is aimed at unifying and integrating development efforts towards increased efficiency and effectiveness of grants and projects carried out by the Kingdom in Yemen as part of the international development cooperation system. SDRPY is also aimed at assisting the Yemeni Government in achieving economic recovery and social prosperity, and advancing comprehensive development. It contributes to developing infrastructure in Yemen, improving access to basic services, and providing job opportunities for Yemeni citizens, while building the capacities of the Yemeni Government, local authorities and social institutions in an effective and sustainable manner. SDRPY finally builds national, regional and international partnerships that mobilize and integrate efforts for development and reconstruction in all Yemeni governorates.