ESCWA: 31 Arab billionaires own as much wealth as half of the region’s population 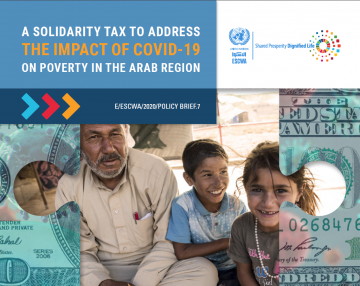 A 1.2% solidarity tax can eliminate poverty in middle-income Arab countries

Beirut, 3 June 2020--The Arab region’s top 31 billionaires, all of whom are men, own almost as much wealth as the bottom half of the adult population. Such inequality will be exacerbated by COVID-19 but would be offset by a well-designed solidarity tax, recommends a new policy brief (attached) issued today by the United Nations Economic and Social Commission for Western Asia (ESCWA).

The Arab region suffers from rampant inequality, with the wealthiest 10% of Arab adults holding more than 75% of total regional wealth. It is also the only developing region in the world where income poverty rose in the last decade: in 2020, about one third of the population of 14 Arab middle-income and least developed countries, or 115 million people, are estimated to be poor, up from 66 million people in 2010. Owing to conflicts and economic recession, poverty represents a major development challenge that is now accentuated by the COVID-19 pandemic.

According to the study, a 1.2% solidarity wealth tax could lift millions out of poverty in middle-income countries. The proposal is supported by the relatively modest cost of poverty eradication in these countries, estimated at 15.6 $billion in 2020, compared with the 1.3 $trillion wealth estimated to be held by their richest 10%.

“Pro-poor initiatives should be supported by the richest decile and have a direct positive impact on the most vulnerable social groups,” said ESCWA Executive Secretary Rola Dashti, clarifying the proposal.

In most Arab countries for example, the real estate sector attracts substantial investment but contributes little to tax revenues. A fair and progressive taxation system, supported by political will and strong institutional capacity, can raise the revenues required for poverty reduction interventions without imposing additional fiscal burdens.

ESCWA also argues that its proposal of a solidarity tax is inefficient for Arab conflict-stricken and least developed countries, where there simply is not enough wealth at the top to cover the cost of eradicating poverty. Those countries need to resort to other fiscal and tax revenue generation policies and, more importantly, to foreign assistance.

“Emergency regional support and solidarity are needed today more than ever before,” affirmed Dashti, reiterating her call for the establishment of a regional social solidarity fund to ensure a rapid response to the COVID-19 pandemic and address humanitarian needs and food shortages in the most vulnerable countries.

The policy brief is part of a series of impact assessments of COVID-19 undertaken by ESCWA to support Arab Governments in joining efforts to mitigate the effects of the pandemic.

Document:
A Solidarity Tax to Address the Impact of COVID-19 on Poverty in the Arab Region
Tweets by @UNESCWA