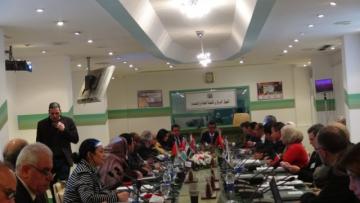 The Tenth Session of ESCWA Statistical Committee was hosted on 30 and 31 January 2013 at the Central Agency for Public Mobilization and Statistics (CAPMAS) in the Egyptian Capital Cairo. The Committee gathered heads of national statistical offices in the ESCWA region, and concerned parties and experts from local and international organizations. The opening session witnessed statements by ESCWA Executive Secretary Rima Khalaf delivered by Karim Khalil, her Special Assistant and ESCWA Secretary of the Commission ad interim, Mahdi Allak, Head of the Iraqi Central Organization for Statistics and Information Technology (COSIT) at the Ministry of Planning and Development Cooperation, Huda Abul Leil, Director of the Department of Statistics and Databases at the League of Arab States (LAS), and Abu Bakr Al Jundi, CAPMAS representative. Khalaf said that the Tenth Session of the ESCWA Statistical Committee is convening at a time of significant change for the Regional Commission, whose membership has recently expanded to include three additional Arab States, namely Tunisia, Libya, and Morocco in a leap towards including all Arab countries. This expansion in membership will undoubtedly cast a positive light on all of ESCWA activities, and especially on statistics, she noted. Khalaf added that the ESCWA Statistical Committee gives priority to national data produced by member countries at every chance possible, and noted that statistical reviews and bulletins the Regional Commission produces have been progressing greatly in relying first and foremost on national data sources. Statistics produced and disseminated by ESCWA aspire to project a comprehensive image of the Arab world, since current member States represent over 90 percent of the Arab countries’ total GDP, and include over 72 percent of their citizens. Allak, for his part, thanked Egypt and CAPMAS for hosting the Session. According to Allak, the preceding Session made notable achievements despite the circumstances because statistics assume a big role in times of recession and recovery alike. Abul Leil noted LAS's participation for the first time in ESCWA’s Statistical Committee meetings, highlighting common efforts and coordination on both ends that made this step possible. In his statement, Al Jundi commended ESCWA's efforts during the last few years to activate statistical work, saying that interest in development is always accompanied by a similar interest in statistics. Pursuant to the rule of alphabetical order adopted at the UN, Oman assumed the chairmanship of the tenth session of the Statistical Committee, succeeding Iraq, which assumed the chairmanship of the ninth session, from November 2010 to October 2012. At its tenth session, the Statistical Committee aimed to consolidate cooperation between member countries and with other regional and international organizations active in statistics. It considered strategic and forward-looking issues related to official statistics in the region, including: implications of regional and global events for the statistical work in the region; capacity-building in statistics for evidence-based policymaking; and effective use of statistics in policymaking. The Committee also reviewed the projects and activities currently undertaken by the Statistics Division at ESCWA, as well as the future projects and initiatives in the field of statistics. It made comments on the progress achieved and current activities, and gave recommendations on the future work in the field of statistics, with a view to strengthening the statistical capacity of member countries.