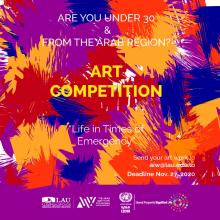 ﻿﻿﻿Beirut, 27 October 2020--The United Nations Economic and Social Commission for Western Asia (ESCWA) and the Arab Institute for Women (AiW) at the Lebanese American University (LAU) launched today their annual regional youth arts competition on the occasion of the 16 Days of Activism against Gender-based Violence campaign on the theme of “Life in Times of Emergency”. Submissions from young people under 30 are accepted until 27 November.

This year, the 16 Days of Activism campaign focuses on the impact of emergencies on women and girls. It raises awareness of and increases momentum towards ending violence against women and girls worldwide.

Since the early stages of the COVID-19 pandemic in the region, there has been an increase in violence against women and girls, both in the home and online. The year 2020 has also witnessed other types of emergencies, including chronic conflict and occupation, natural disasters and toxic explosions.

While the campaign focuses on gender-based violence, attention will also be given to the wider ramifications of emergencies on the health, socioeconomic situation, safety and political participation of women and girls.

The competition is open to all young persons in the Arab region under the age of 30. In order to allow people to express themselves and raise their voices in their own way, the contest is open to all art forms, such as painting, video, photography, poetry, music, etc.

Winners will be showcased at a virtual event on Thursday 10 December 2020. The event will be preceded by a webinar with experts and activists discussing in greater detail the impact of emergencies on the lives of women and girls in the Arab region.

Initiated in 1991 and marked annually from 25 November to 10 December, the campaign first aimed to draw attention to violence against women as a human rights violation at a time when such violence was considered to be a private matter. Ever since, the campaign has gained international attention and observance, with several commemorative events occurring globally. Its dates are significant; 25 November is the International Day for the Elimination of Violence against Women, while 10 December is International Human Rights Days and the anniversary of the Universal Declaration of Human Rights.

For more information and to apply: https://www.unescwa.org/16Days2020