Arab Regional Conference on Population and Development opens in Beirut 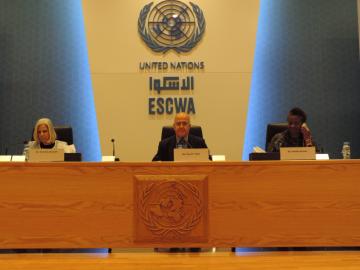 ﻿﻿Beirut, 30 October 2018 (Communication and Information Unit)--- The Arab Regional Conference on Population and Development kicked off today in Beirut with a focus on achievements and challenges since the adoption of the Cairo Declaration five years ago, which calls upon Arab States to address issues related to social and economic inequalities and ensure the wellbeing of all people, especially vulnerable groups.

The three-day event, co-lead by the UN Economic and Social Commission for Western Asia (ESCWA), the UN Population Fund Arab States Regional Office (UNFPA-ASRO) and the League of Arab States (LAS), will cover ways to accelerate progress and explore links with the 2030 Agenda for Sustainable Development—the global plan of action for people, planet and prosperity.

“Together, we are here to review the centrality of the ICPD Programme of Action to achieving the Sustainable Development Goals,” said Dr. Natalia Kanem, Under Secretary-General and Executive Director of UNFPA, referring to the groundbreaking agreement adopted in 1994 that integrated population issues in the global development discourse.

“Why is it still relevant 25 years later? The 2013 Cairo Declaration in essence, reaffirms a human rights-based sustainable development agenda. Its focus on sound evidence-based population policies that rest on gender equality, investment in young people, and access to sexual and reproductive health services and reproductive rights has resulted in proud achievements across the region,” she added.

Ms. Kanem highlighted some of these achievements noting that maternal deaths have fallen in several Arab countries since 2013, such as in Lebanon, Oman and Morocco; in 2017, Tunisia adopted a comprehensive national law to combat all forms of gender-based violence; Palestine ratified the Convention on the Elimination of all Forms of Discrimination Against Women without reservations in 2014; and in Syria, Libya and Yemen healthcare providers have worked around the clock to ensure that women and girls have access to reproductive health services, despite deadly conflicts.

While advances are significant, the chief of UNFPA stressed that the list of challenges is also long. The 2018 regional conference will therefore review persisting gaps in the implementation of the Cairo Declaration across the Arab region and offer a set of recommendations on moving forward.

“I'm pleased to announce the establishment of the Arab Council for Population and Development which will constitute an Arab umbrella to implement the Cairo Declaration and the results of the reviews at our regional conference,” said Haifa Abu Ghazaleh, Assistant Secretary General and Head of the Social Affairs Sector at LAS, sharing additional measures to rise above current challenges.

Ms. Abu Ghazaleh stressed that the Council is working to establish regional population policies and track progress from a life cycle approach that includes all stages of life from birth to death. The Council will also be trusted with establishing an Arab Population Observatory to assess policy implementations and provide recommendations based on best practices.

On Tuesday, Arab countries presented their national experiences to create a dialogue on existing and emerging priorities as well as lessons learned. In addition to ministers and high-level officials from relevant ministries and National Population Councils, participants include parliamentarians, representatives of civil society organizations, regional organizations, UN agencies, academics, experts, media and other stakeholders.

“We need an approach that takes into account population dynamics in development planning based on a genuine political will, a clear vision, concerted efforts, detailed and up-to-date information and data, and coordinated, integrated and cross-sectoral programs that include everyone,” stressed Mounir Tabet, the Deputy Executive Secretary of ESCWA.
The opening session ended with the launch of the “State of World Population (SWOP) 2018 Report” by Luay Shabaneh, the Regional Director of UNFPA’s Arab States Regional Office. The study highlights the power of choice in regard to reproductive rights, stating that the real measure of progress is people themselves—especially the well-being of women and girls, their enjoyment of their rights and full equality, and the life choices that they are free to make.