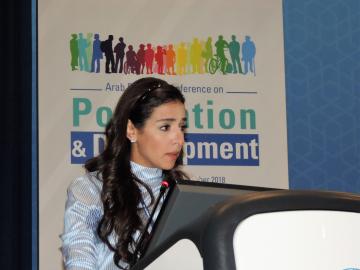 ﻿﻿﻿Beirut, 02 November 2018 (Communication and Information Unit)--As the Arab Regional Conference on Population and Development concluded on Thursday, governments, civil society and international organizations were called upon to increase their impact by ensuring that policies adequately protect individuals, preserve their dignity and uphold their human rights.

Since Tuesday, more than a hundred participants representing 21 Arab countries have been analysing achievements and challenges since the adoption of the Cairo Declaration in 2013 at the last regional review of population and development dynamics in Arab countries.

“The Cairo Declaration and its regular reviews are an important tool to ensure that the 2030 Agenda in the Arab region is people-centered, especially in view of the population shifts, movements and changes of the last few years,” said Luay Shabaneh, the Regional Director of the UN Population Fund Arab States Regional Office (UNFPA-ASRO) which is co-leading the conference with the UN Economic and Social Commission for Western Asia (ESCWA) and the League of Arab States (LAS).

Mr. Shabaneh stressed that the Agenda holds the most comprehensive vision for ensuring that population policies rest on the human rights of people—men and women, young and old—especially their power of choice to take decisions about their own lives, particularly related to reproductive issues.

“The population dynamics of any region directly impacts the prospects for realizing sustainable dynamics and therefore, the implementation of the ICPD [International Conference on Population and Development] is a prerequisite to achieving the Sustainable Development Goals for there is no real development unless people themselves are empowered and fulfilled,” he stressed.

The ICPD Programme of Action, adopted in 1994 by 179 Member States, lays out a far-sighted plan for advancing human well-being that places the human rights of individuals, rather than numerical population targets, at the centre of the global development agenda. Ahead of its 25th anniversary, this review in 2018 was a critical step to assessing where the region stands and identifying existing challenges and emerging issues.

“We are pleased with the outcome of this conference which establishes a road map to advance the causes of populations by enabling and engaging the most vulnerable groups to shape a better future for everyone in the Arab region,” said Mounir Tabet, the Acting Executive Secretary of ESCWA, in his closing remarks.

He underlined that deliberations on these issues “do not end here” as further dialogue on the way forward is expected at upcoming global forums. This was echoed by Haifa Abu Ghazaleh, Assistant Secretary General and Head of the Social Affairs Sector at LAS, as she shed light on next steps.

“We are now preparing for the Arab Economic and Social Development summit to be held next year in Lebanon,” said Ms. Abu Ghazaleh, noting that its focus will be on improving the lives of Arab people and putting them at the centre of development.

She also recalled that the Arab League’s Council has endorsed the establishment of the Arab Council for Population and Development.

“This Council will set the appropriate principles and strategies for the work of national population committees and institutionalize their action at the regional level to facilitate coordination between the 2030 Agenda for Sustainable Development and the population agenda in the Arab region,” she continued.

The regional conference resulted in key messages that emanated from the three-day discussion. Member States now have several days to review them before they are published. Once finalized, these will feed into the 52nd Session of the Commission on Population and Development whose outcome will be submitted to the 2019 High-Level Political Forum, to be held under the theme “empowering people and ensuring inclusiveness and equality.”

More details including the full agenda of the conference:
https://www.unescwa.org/events/arab-regional-conference-population-development

Press Release on the opening of the conference:
https://www.unescwa.org/news/arab-regional-conference-population-and-development-opens-beirut