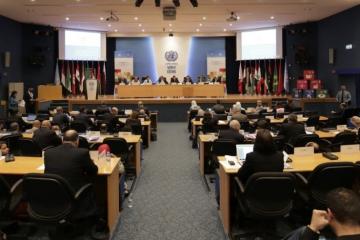 Beirut, 12 April 2019 (ESCWA)--The 3-day Arab Forum for Sustainable Development (AFSD) ended yesterday at the United Nations Economic and Social Commission for Western Asia (ESCWA) headquarters in Beirut. It stressed that equality is one of the natural human rights and a basic foundation for development, adding that the cost of achieving equality, no matter how high it is, remains less than that of inequality which leads to discrimination, violence, instability and impedes development.

The Forum concluded with a set of recommendations reaffirming the principles of the 2030 Agenda for Sustainable Development. Iraq, as the chair of this year’s Forum, will submit these outcomes on behalf of the Arab region on 9-18 July to the High-Level Political Forum (HLPF) held under the auspices of the UN Economic and Social Council (ECOSOC) and then on 24-25 September to the UN SDG Summit held under the auspices of the UN General Assembly.

The closing ceremony was attended by Iraqi Minister of Planning Noori al-Dulaimi who stressed the need to implement the programs and recommendations agreed upon during the Forum, while maintaining continuous monitoring to review the progress achieved and increase awareness of the importance of Sustainable Development Goals (SDGs).

Following this year’s theme of “Empowering People and Ensuring Inclusiveness and Equality in the Arab Region,” the Forum affirmed that the Israeli occupation is the primary reason behind the lack of development in the occupied Palestinian territories. Recommendations also suggested ways to better approach social justice and stressed the need to link it with mechanisms focusing on human rights.

The Forum also highlighted the need to enable youth and improve access to information and communications technology (ICT) as well as digital education and see to provide them with better opportunities. It also reiterated the need to better address illicit financial flows so as to efficiently finance sustainable development.

Despite serious challenges, ESCWA Executive Secretary Rola Dashti had concluded her opening statement on Tuesday with an invitation for all parties to work together tenaciously and determinedly, to ensure a safe and promising future where no one is left behind. “I am aware that we face great challenges, but our determination is greater,” she stated.

Indeed, “Leaving no one behind” was one of the main focuses of the Forum, with participants reaffirming their commitment to empower people, youth and women in particular, and fight inequality which sees its highest levels in the Arab region.

This year’s AFSD focused on identifying the Arab region position compared with the rest of the world and revealed that the region needs to push more economic reforms and economic diversification while focusing on innovative investments and engage in global value chains for development.

The last three days were full of a wide scope of discussions, exchange of expertise and opinions regarding several angles that focused on the progress achieved in the implementation of Agenda 2030; the colossal challenges facing the Arab region, namely peace and security; and delved into the Voluntary National Review (VNR) processes, whereas this year, Algeria, Iraq, Kuwait, Mauritania, Oman, and Tunis will be presenting their VNRs.

On the sidelines of the Forum, ESCWA launched the Financing for Sustainable Development Report 2019  at the regional level, following its global launch in New York. The regional launch gathered high-level representatives of Arab governments, experts from the finance, development, economy, trade and the environment sectors. “3.6 trillion US dollars are needed to fund the 2030 Sustainable Development program, starting today till 2030”, said the Deputy Executive Secretary of ESCWA, Mr. Mounir Tabet, in his opening remarks.

At the opening ceremony, the three winners of the photo competition around SDGs launched by ESCWA earlier this year, were announced and received their prices, and Mohamad Ahmad Elezbawi from Egypt landed in the first place, while Yemenis Mansour Mohsen and Angham Al Ssarhi ranked second and third respectively.

AFSD is the primary regional mechanism follow-up on the 2030 Agenda. It provides a unique opportunity to review where the Arab countries stand, what policy approaches have been developed and to what extent development planning is in line with the Agenda. It is organized by ESCWA in partnership with over 25 partners including the League of Arab States (LAS).