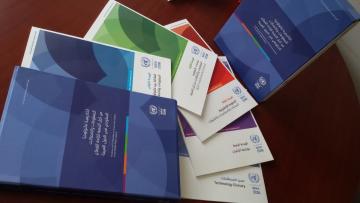 ﻿﻿ESCWA is implementing the project "Academy of ICT Essentials for Government Leaders in the ESCWA Region"[1] (AIGLE), which is a three-year project that started in February 2013 and is funded by the United Nations Development Account for capacity development. The project aims at building the capabilities of government officials and leaders in the ESCWA member countries in the areas of ICT for development, through both traditional and online training systems.  The ICT Academy for the Arab region builds upon the achievements and lessons learned from a similar academy project launched in 2008 in South Korea by the Asian and Pacific Training Centre for Information and Communication Technology for Development (APCICT), within the Economic and Social Commission for Asia and the Pacific (ESCAP).  Similar to the APCICT Academy, the AIGLE project is designed to support the governments of Arab countries in strengthening national capacities for enabling an environment that promotes the transition to the knowledge economy and ensures its sustainability.

Needs Assessment and Topics of Priority

The first activity of the project was a study to assess the needs of the Arab governments in the area of ICT for development, which was realized in partnerships with a number of partnering institutions who participated in a regional survey that received around 1540 responses and was the basis for the identification of the topics of priority for the Academy modules to be developed.  The survey results verified the significant need for building capacities in the area of ICT for development, and the need for evidence based reporting on the development dimensions of ICTs to support decision making processes. The needs assessment identified six topics of priority for the Arab region,[2] the first four of which were selected as topics for the core training modules of the ICT Academy.

In 2015, the AIGLE project has produced the following four core training modules[3] in Arabic, to be the basis for extending to government officials and leaders the essential knowledge and skills to leverage ICT for national and regional socioeconomic development.

(1)   Linkages between ICT and development.

(2)   ICT for development policies: main elements and tools for management.

For the production of these training packages, efforts were put to both the preparation of content harmonization among the four modules.  The work started by studying the thematic training modules of the APCICT academy in Korea, analysing their content and basic concepts towards adapting and localizing it to the needs of the Arab region. Additionally, tremendous research work was undertaken to introduce case studies and exercises from the Arab region in the training package of each of the four training modules and towards enhancing the relevance and usefulness of these modules for the trainers in the Arab region.

In 2015, two Regional Training-of-Trainers (ToTs) Workshops were held in Beirut, from 8 to 12 June and from 24 to 27 August 2015.  The Workshops were attended by around 105 participants, including 88 trainers as well as the national coordinators from the participating 14 Arab countries and the experts who has either prepared or contributed or reviewed the four training modules. The participating Arab countries included Bahrain, Egypt, Iraq, Jordan, Kuwait, Lebanon, Morocco, Oman, Palestine, Saudi Arabia, the Sudan, the Syrian Arab Republic, Tunisia, and the United Arab Emirates.

Both workshops were featured by a high-level remote participation from the APCICT Academy in South Korea, which has strengthened the collaboration between the AIGLE project management and the APCICT academy.

Participants in these training workshops emphasized the importance of the AIGLE project for the Arab region and confirmed the need for the training it provides to the government leaders, as well as supported a wide reach of the training programmes to the government leaders who are responsible for formulating ICT policies, developing and implementing ICT-based applications and the public sector directors who need to utilize the ICT tools for development projects and initiatives.  The importance of the regional coordination provided by the project was also emphasized, towards sustaining a periodic update of the modules with case studies and experiences from the Arab region.

In addition to the ToTs activities, collaboration with the AIGLE national partners resulted with the initiation of 10 national training programmes on the four modules, for the years 2015 and 2016.  These plans are expected to lead to the training of more than 6000 employees of public sector leaders and decision makers in ten Arab countries, namely: Egypt, Iraq, Jordan, Morocco, Oman, Palestine, the Sudan, the Syrian Arab Republic, Tunisia, and the United Arab Emirates.  The national trainings have started in a number of these countries, and several academic institutions have included the modules in their curriculum in coordination with ESCWA.

Online platform for the ICT Academy

For the wide dissemination of the AIGLE training packages and in support to the national training plans in the Arab region, the project has developed an online platform to make the content of the Academy's training modules available to all beneficiaries and stakeholders through both mobiles and desktop computers. Training packages will be available online in several forms, namely the actual module files, the training sessions, the presentations, and the videos of the training workshops.  The virtual platform will enable all participants to register, discuss and exchange experiences and opinions as well as develop a database of case studies from the participating Arab countries.

To support the sustainability of the AIGLE project and its capacity building impact in the Arab region, ESCWA has formed collaborative partnerships with stakeholders that have training programmes in their mandate, from the public administrations and governmental and academic bodies in the participating Arab countries. In addition, the project plan includes nine advisory services missions in 2015 to five Arab countries (Egypt, Morocco, Oman, Sudan, and Syrian Arab Republic). Furthermore, the project plan the convening of a Regional Workshop on Assessment of Achievements and Future Perspectives for the Sustainability of the ICT Academy for the Arab Region, in Beirut, from 21 to 22 December 2015. This meeting will highlight the project components and main achievements, follow up on the progress made in the national training plans, and deliberate on the future prospects of the Academy that sustains the dissemination of the its core training modules and their subsequent update with case studies and the progress in regional and global efforts in the area of ICT for development.

[3] The core training modules are available through: http://www.escwa.un.org/sites/aigle/documents.asp