﻿﻿﻿﻿﻿﻿﻿﻿﻿﻿﻿﻿﻿﻿﻿﻿﻿﻿﻿﻿﻿﻿﻿﻿﻿The United Nations Economic and Social Commission for Western Asia (UN-ESCWA), and in partnership with several regional and international organizations and Member States, is organizing several side events during COP22 in Marrakech, Morocco from 7 to 18 November 2016.

The side events addressed the regional perspective of climate change and focused on key priorities for the Arab region, regional initiatives and national efforts to adapt and mitigate the impacts of climate change.

Hydro-Climate Services for All, Wednesday, 9 November 18:30-20:00
This side event was convened by the UN-Water in collaboration with ESCWA, UNESCO, UNECE and WMO. The aim of this event was to start debate and discussion on means to bridge the gap between the producers and users of hydro-climate services, between water and climate communities, science and policy-makers and negotiators. Discussions during the event addressed issues related to hydro climatic services accessibility to users; and the need for accessible GCF financing for adaptation and mitigation. Hydro-Climate Services for All (video)

ESCWA contributed to a side event aiming to support the establishment of Women-ACS (Women Advancing Climate and Climate Change Sciences) and brought together representatives from national and international institutions active in supporting the leading role of women in climate and climate change sciences. ACS is a new international initiative that aims to increase women's participation and accomplishments in the domain of climate and climate change sciences. Ms.Carol Chouchani Cherfane, Chief, Water Resources Section, ESCWA, contributed to the session dedicated to guide the formation of Women-ACS through  informing discussions drawing on experience gathered from the Arab region in relation to women participation in the fields of science and technology. Read more 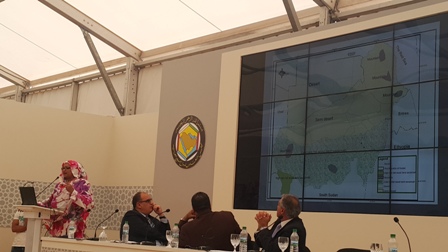 In that context, the side event on “Climate Change Impacts on the Arab Region and Adaptation and Mitigation Initiatives” was convened on 15 November and took place over two segments: a morning session for Arab experts and moderated by Mr. Ayman Shasly, Chair of the Arab Negotiation Team on Climate Change, Advisor for International Policies, Ministry of Energy, Industry, and Mineral Resources, Kingdom of Saudi Arabia  and an afternoon session moderated by Ms. Roula Majdalani, Director, Sustainable Development Policies Division (SDPD), ESCWA.  for high-level speakers. During the event, participants shared experiences and lessons learned from regional initiatives and national efforts on climate change impacts and climate change adaptation strategies and measures and mitigation actions towards implementation of Paris Agreement and achieving the sustainable development in the Arab region.  Read more. 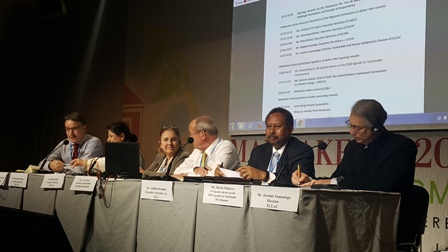 between INDCs and SDGs: common goals, co-benefits, trade-offs, prioritization and sequencing. The event was moderated by Mr. Yvo de Boer, President of the Sustainability Challenge Foundation and Founder of Responsibility (the former Executive Secretary of the UN Framework Convention on Climate Change (2006-2010)) and joined by the Executive Secretaries of the Regional Commissions as panelists, and Mr. David Nabarro, UN Special Adviser on the 2030 agenda for Sustainable Development, as special guest speakers. The side event explored the interface between the Intended Nationally Determined Contributions (INDCs) and the Sustainable Development Goals (SDGs), including the common goals across these two agendas.

It highlighted the core technical and institutional capacity gaps across the regions and discussed the role of regional commissions in implementing Agenda 2030, and the Paris Agreement and how to support countries in filling the gaps identified ensuring synergies between the agendas. Ms. Roula Majdalani, Director of The Sustainable development Policies at ESCWA delivered ESCWA speech  which highlighted the progress that member countries were doing in operationalizing the Paris Agreement and the 2030 Agenda and the challenges that they are facing in this process. Read more 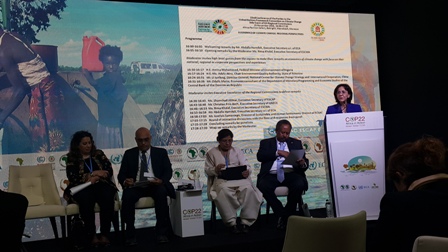 Economics of climate change: regional perspectives programme, Tuesday, 15 November 16, 2016, 16:00-17:30:
The side event on Economics of climate change: Regional perspectives programme was convened as part of the series of side events organized by ESCWA in partnership with UN regional commissions. ESCWA Executive secretary Ms. Rima Khalaf, moderated the session which aimed at obtaining better understanding of the economic impacts of climate change in each region and of investments needed at regional and national levels for climate change adaptation and mitigation. This side event included a speech delivered by Ms Roula Majdalani, Director of the Sustainable Development Policies Division at ESCWA as well as interventions from executive secretaries and directors of concerned divisions in other UN regional commissions. Read this.

Palestinian Main Achievements between Accession on 17 March 2016 and COP22 and Future Ambition, Friday, 18 November 13:15-14:45
This event focused on the main Palestinian achievements since March 2016 and the future plans. Ms Rima Khalaf, ESCWA Executive Secretary delivered a speech informing that Palestine proceeded with preparations for implementation of its nationally determined contributions (NDCs), and articulated ambitious plans for combating climate change, including the submission of a readiness programme to the Green Climate Fund. As such, the Palestinian people has reaffirmed its commitment to the global common goals and the well being of humanity. Read more.